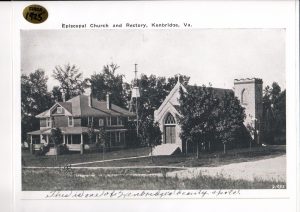 The Episcopal Church of St Paul and St Andrew is located in a small Southside Virginia town, Kenbridge, Lunenburg County, Virginia. The Church was formed by the consolidation of St. Paul’s Church, established in 1917, and St. Andrew’s Church, established in 1908. St. Paul’s Church was a part of the Historic Cumberland Parish of Virginia established in 1745. The cornerstone of the present St. Paul’s Church was laid in May 1917 and the building was dedicated and consecrated by the Presiding Bishop in December of that year. Bricks for this traditionally designed structure, located in a residential section of the town of Kenbridge, were transported from the “old” St. Paul’s Church on Route 49, north of Victoria. The cornerstone from the “old” St. Paul’s was dated 1832. In 1973, St. Paul’s added a parish hall, which was dedicated on May 13 by the Right Reverend David S. Rose. The two stained glass windows in this parish hall were brought from old St. John’s Church at Woodend and are considered irreplaceable.

St. Andrew’s Church, located in Victoria, Lunenburg County, Virginia, began with a wooden church building erected in 1908, organized under the direction of The Reverend Girard William Phelps. At that time, St. Andrew’s was also part of the Cumberland Parish.   In 1994, St. Andrew merged with St. Paul’s; the new church took the name of The Episcopal Church of St. Paul and St. Andrew.

St Paul and St Andrew is part of the Episcopal Diocese of Southern Virginia, located in Newport News, VA. 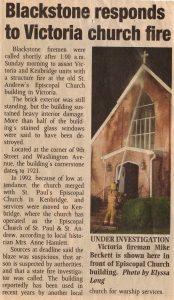